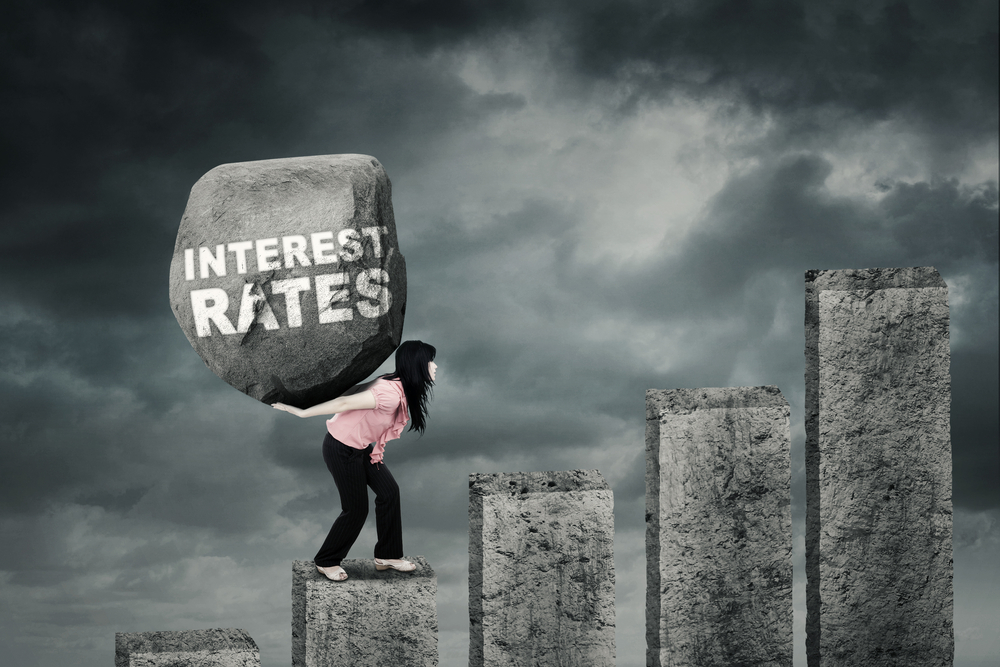 Is a Fear Of Interest Rate Rises Justified?- November 2021

There are three words which can have Australian property buyers either rushing toward listings, or fleeing in the opposite direction…

Interest rate movement.
I’ve seen it time and again during my years in this industry. A cohort of stakeholders make knee jerk reactions in response to interest rate announcements. They seem to hinge their decisions about what to buy, whether to sell, or how much they’ll offer for a home based entirely on the Reserve Bank’s utterances each month.
Now, I’m not saying interest rate changes aren’t an important consideration. However, I think it’s time to inject some reasoned conversation into the discussion – particularly given a recent rise in inflation.
Here’s my take on the current interest rate situation, and why savvy buyers shouldn’t be alarmed by potential rises.

The state of play
We at living in an extraordinary era for interest rates. Rates have remained at insanely low levels for more than a decade, and the current cash rate of 0.1 per cent might as well be zero for all intents and purposes.
This RBA graph tells the story. 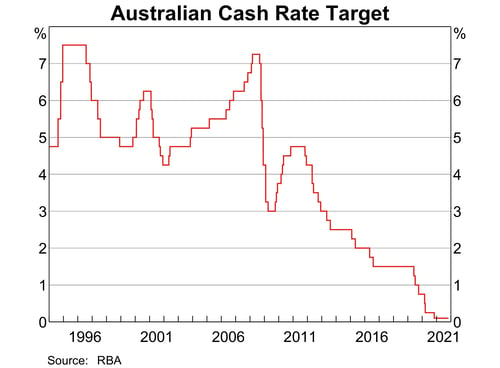 The cash rate hasn’t risen for about a decade. In fact, if I were to expand this graphic further, you’d see we haven’t had a double-digit cash rate since June 1991 – and we are certainly a long way from our peak interest rate of 17 per cent in 1990.
Interest rate movements are a big lever for the RBA – they are neither subtle nor surgical. If one element of the economy is flagging, then a drop in interest rates might add much needed stimulus, but it similarly boosts other booming sectors who don’t require a leg up.
By the same measure, if inflation is on the rise and interest rates need to increase, then all sectors are affected – even those already struggling to make ends meet.

Recent moves
Interest rates can’t effectively go any lower. Most of the benefit has already been factored in by markets, so the next move will be a rate rise.
Of course, during the pandemic, there’s been no will to increase interest rates. In fact, the RBA had previously suggested interest rates were locked in for the long term.
I am part of a select group of economists who provide opinions to the NAB Quarterly Property Survey and the monthly Finder Survey on interest rate movements and most of us (including myself) comfortably believed an interest rate rise wouldn’t come until late 2023.
But recent RBA commentary in response to rising inflation suggests this is timeframe will be bought forward. Australia’s economic response to the pandemic, plus the runaway housing market are having an impact. Inflation presently sits at 2.5 per cent – firmly in the middle of the RBA’s target range of 2.0 to 3.0 per cent. The RBA also need to see evidence that wages will rise more than 1.5 per cent.
I’ve now brought my rate rise prediction forward to November 2022, and several of my fellow commentators agree.

What’s that mean for markets?
So, the worry for homeowners and borrowers is that rate rises will torpedo lending and gut the property market.
I, however, don’t believe that will happen for a variety of reasons.
Firstly, when rates do rise, they won’t shoot up several basis points in one hit. Any increases will be measured and gradual. The RBA is not looking to ruin the economy overnight. The shift will be subtle – particularly in post-pandemic Australia where many businesses still need assistance to survive and keep employing workers.
Next, most borrowers have already factored rate rises into their home budgets. Recent years have taught us all to expect the unexpected. Having some money sitting in the offset account, or reducing frivolous spending, have become the norm. As such, most borrowers I know can handle an increase of a few percentage points.
But even if you haven’t takes care with your home finances, fear not – the bank is doing that for you. The Australian Prudential Regulation Authority recently released an edict that banks must increase their interest rate tolerance figure from 2.5 per cent to 3.0 per cent when assessing a new loan. This means the lender is assessing your loan application based on an interest rate that’s 3.0 per cent higher than what you are actually paying. This’ll test your financial resilience when rates do eventually increase.
It’s all part of our robust Aussie lending landscape.
Finally – despite opinion that interest rates are the be-all and end-all of property market performance, history shows they’re less impactful than most imagine.
Analysis released by the Property Investment Professionals of Australia looked at five periods of increasing cash rate movements since 1994. It showed house prices continued to rise – sometimes significantly – even after rate rises of up 2.75 percentage points over just six months.
The other upside of rising interest rates for property investors is that it usually means rents will rise (increasing yields) as there are less buyers and more renters entering the market.

The upshot is this – I believe interest rates will rise, and there will be some impact on demand, but it won’t be Armageddon. There are far more factors at play propping up the strength of Aussie residential property, so holding off your purchasing decisions in expectation that rising rates will deliver falling values is a mug’s game.