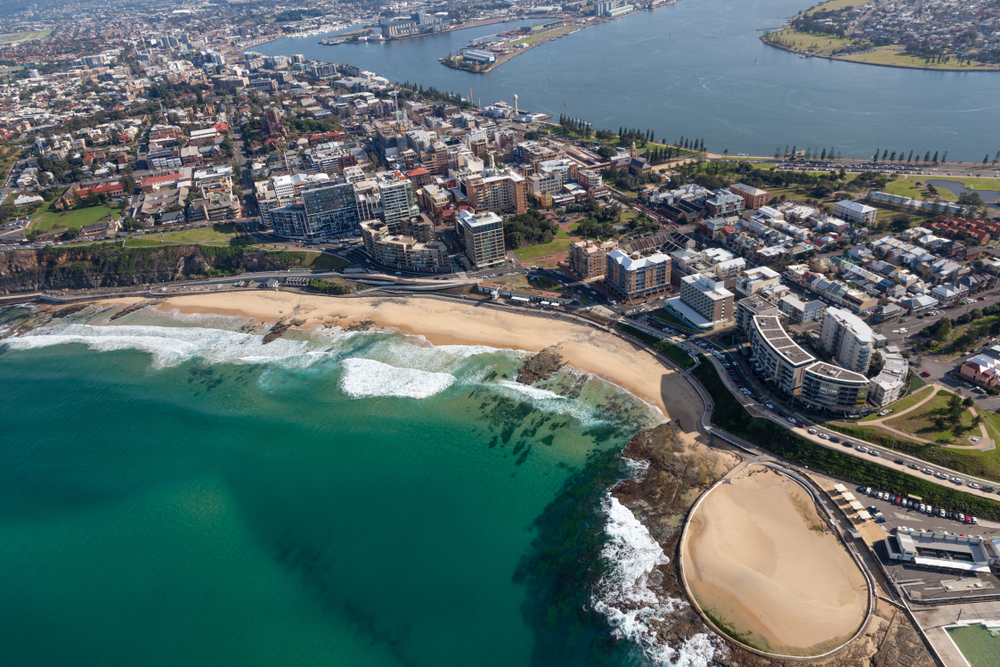 For a while, the northern New South Wales town of Newcastle was best known for being a steel town, the home of model Jennifer Hawkins and the site of a rare major earthquake in the late 1980s.

But this special gem of picturesque Aussie lifestyle has forged a renewed reputation that’s putting it on the national map.

These days, Newcastle has a diverse economic hub, growing infrastructure investment, the title of being the gateway to the popular Hunter Valley region and a status as an emerging property hotspot.

For those looking to escape the rat race of Sydney, it offers a coastal location with excellent affordability, a burgeoning cultural scene and big house blocks. For investors searching for new opportunities, there’s growing demand, small development opportunities and solid long-term growth potential.

When the massive steelworks closed in Newcastle in the late 1990s, it was devastating for the region. The unemployment rate soared, there was an exodus of residents and fortunes slumped.

A decade or so later during the Global Financial Crisis, the city once again was the centre of national attention – but for a different reason.

It bucked the trend of an economic downturn, thanks to a more diversified economy that includes substantial health and education workforces, and its still-significant coal export facilities.

More recently, Newcastle is being discussed as a sea change hotspot. People from the cities, both retirees and young families searching for a slower pace, are relocating to take advantage of the lifestyle on offer.

It’s easy to see why.

Compare real estate affordability in Newcastle to major capital cities, and you get a weighty bang for your buck here. It’s also a seriously liveable city, with good services, new infrastructure like the light rail service, strong employment prospects, incredible natural beauty and plenty to see and do.

Unemployment in the Newcastle and Lake Macquarie region has fallen continuously over the past several years, from 7.9 per cent in 2015 to 5.6 per cent. Rental vacancy rates have tightened to 1.9 per cent, thanks in large part to strong migration from Sydney and interstate.

And investors from further afield are taking night. There’s a wealth of small and mid-range development opportunities in Newcastle, which has seen new building approvals jump – up 27 per cent in 2018/19 compared to the previous 12 months.

What’s happening in the market?

Newcastle was not immune from the softening in property prices that were felt across most Australia’s major centres over the past two years (late 2017 to May 2019).

From its peak, the median house price dropped eight per cent to $539,000 while unit median prices slumped 10 per cent to $461,000. But, that’s off the back of strong growth in the years before, and the losses experienced were lower than experts anticipated.

And some suburbs continued to grow during the market correction, showing in-demand areas weathered the storm.

For example, the sought-after suburb of Merewether Heights saw its median house price grow 7.7 per cent in the 12 months to June, to $1.05 million. It’s not just high-end property selling well though, with the mid-range Warners Bay on Lake Macquarie seeing its median climb four per cent over the same period to $630,000.

The affordable Maryland, half an hour from the Newcastle CBD, grew 3.5 per cent to $520,000, indicating first homebuyers are confident.

Locals have a lot of choice in Newcastle.

There’s a bustling and ever-evolving central district, with a slew of upmarket restaurants, trendy eateries and cool bars, with more popping up each month. The coffee scene – always a good indicator of gentrification – is burgeoning also.

Newcastle, of course, is famed for its stunning stretch of coastline which gives the city a distinct and desirable beach town feel. While it has the services and amenities of a large regional area, it has the vibe and friendly, relaxed flow of a smaller coastal enclave.

The major University of Newcastle provides a draw card for tertiary students from near and far, giving a vibrant and youthful feel to things, as well as providing a strong employment hub.

And the Hunter Valley wine region is just moments away. For tourists, it means a place to stop and explore on their way to vineyards. For locals, it means easy access to weekend jaunts in vine country.

Like I said earlier, there’s plenty of choice in the Newcastle region – the same goes for property buyers.

The in-demand suburb of Merewether has some spectacular homes on the market right now. Just check out this five-bedroom architectural beauty with sprawling living areas, abundant entertainment space and partial sea views. It’s a short walk from the water too. Given all of that, it’s listed for $3 to $3.3 million.

But still in Merewether, there are good opportunities to buy more affordable property with room to improve and add value. This humble little three-bedroom cottage needs some love, but it’s got good bones and sits on a 506 square metre block.

Elsewhere, this restored character home on manicured grounds with three beds in Hamilton South is priced at $899,000, this beautiful five-bed family home in Swansea is right on the water for $1.75 million, and this solid three-bed bungalow in Waters Bay is asking $550,000 to $600,000.

For all intents and purposes Newcastle and its surround are graduating away from steel and toward property gold.  To find the ideal property in the Newcastle and Hunter Region we have local buyers’ agent on the ground that can find the best opportunities and give expert advice on current values.  Local knowledge can give you a much-needed advantage.