Back when the coronavirus pandemic began to take hold in Australia and we collectively stared down the barrel of unprecedented uncertainty, some very bold predictions were made about property prices.

Almost every economic and real estate commentator feared that markets would collapse in a way we’ve never seen before, with estimated losses ranging between 20 and 40 per cent. It was going to be a catastrophe.

When it wasn’t a catastrophe and median price movements defied all expectations by either not changing at all, slipping only very modestly or increasingly a little, the excuses came thick and fast.

It’s the really low listing volumes! If no one is selling, then median price data is meaningless! That’s why prices haven’t collapsed! And low listings are a disaster!

It’s true – listing volumes around Australia have been significantly down on past trends. It seems that unless they absolutely have to sell right now, the vast majority of would-be vendors are sitting on their hands until the world become a little more certain.

And it’s also true that sustained demand from buyers in markets like Sydney is ensuring continued resilience in prices.

We’re told by experts that the seriously low number of listings is a bad sign. It shows flat confidence, it hints at prices that should be lower than they are, and it shows that there’s more uncertainty to come. Or does it?

There’s much more to it when you dig down into the raw data. It actually paints a picture of growing confidence among sellers, higher than thought buyer activity and a rebound in sentiment.

Ordinarily, this time of year is frantic for property. Spring is a time of action when buyers are buoyed by the warmer weather and busy Saturdays inspecting their possible next home or future investment, and sellers are filled with confidence.

But in September, total listings at a national level fell by 1.2 per cent. Year-on-year, listings across the country are now down 7.4 per cent compared to September in 2019.

Those experts must be right… right? Listing volumes haven’t collapsed everywhere, though. Just look at this data from SQM Research.

The biggest fall in listings in September was in Melbourne, which was still in the grips of the toughest COVID-19 lockdowns in the world. Victoria’s economy is on pause, people have been virtually confined to their homes, the streets are empty and no one is buying… and yet there are still more listings than anywhere else in the country, with just a 0.2 per cent fall year-on-year.

In Sydney, the economic powerhouse of Australia and the country’s most populous capital city, listing volumes are up 9.2 per cent compared to this time last year, and up 1.8 per cent on August.

There are some shocking numbers in that table, with double digit reductions in property listings in Adelaide, Canberra, Darwin and Hobart. But those markets are driven by several more volatile factors, like seasonal demand trends, mining, the public service and less resilient economies.

Cast your mind back to September last year. An almost two-year period of price corrections was only just beginning to reverse, with median prices in major cities beginning to tick up again at that time. And yet, 12 months on, in the midst of a global crisis with significant economic, social and health consequences, there are more properties for sale in Sydney and only slightly less in Melbourne.

On top of all of that, SQM Research says the fall in listings in September is likely due in part to increased buyer activity. Stock is being absorbed by buyers, who are out in larger numbers. That’s mirrored by modest lifts in asking prices and exceptionally strong auction clearance rates.

CoreLogic also released listings volume data in September, focusing on new listings – that is, the number of homes newly advertised that month. It found they’re down 22 per cent year-on-year, and 25 per cent below the five-year average.

Its data for total listings indicates a 14 per cent national decline compared to September 2019. So, it’s higher than the SQM modelling. 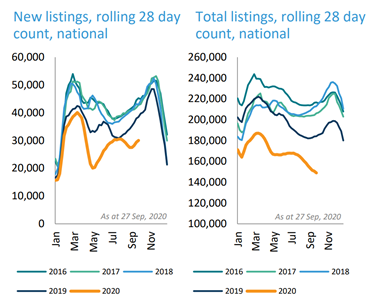 As you can see, total listings are indeed down on previous years, but that decline looks to be plateauing. And the number of new listings is on the rise at a national level.

In releasing this data, CoreLogic added that buyer demand looks to be recovering. Activity is on the rise and there’s been a recent upward trend in values across some cities as a result. Sales volumes in the September quarter was up 2.8 per cent on this time last year, according to its initial estimates.

You know what’s likely to encourage greater confidence among would-be sellers? Buyer activity. The more people out and about, the more normal conditions will feel. A return to normal will a greater number of us the positive sentiment to buy and sell again.

And on that measure, buyer activity is tracking well. Just look at this CoreLogic data on monthly property sales. 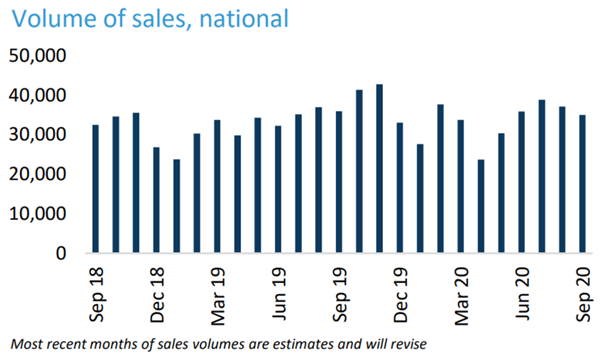 So… listings are low, but not as low as feared and even on the increase in some locations – especially Sydney… and buyer activity is rebounding, driving price increases.

That sounds like the recipe for a period of price growth if you ask me.

Listings will begin to rise across the board when we’re comfortable with this new COVID normal. The ability for health authorities to get on top of outbreaks, negating the need for a yoyoing of restrictions and lockdowns, will allow us to better live with this pandemic.

The benefit of time will also see vendors who hastily scrapped their plans back in March and April feel more comfortable kicking off 2021 by trying their luck again.

And, of course, life goes on. Some will need to downsize, some might relocate, some will welcome children or see their kids need more space, and many will just grow tired of living in limbo.

When it’s all said and done, all of the strong factors remain in place for property prices to stay resilient into the future. Property is a long-term game, after all. But in the meantime, there’s plenty of stimulus and support to keep real estate ticking along, especially in a city like Sydney.

And as you can see from that sales data above, good quality stock remains in high demand. The prospects are bright.

The key for potential buyers, especially as listings begin to tick upwards again, is sorting the good purchases from the bad ones. Buying just anything because the options are limited or prices are starting to rise and you don’t want to miss out is a recipe for disaster.

As the heat returns to markets, don’t get caught out by the rapid pace and make the wrong decision. Engage the services of a qualified, experienced and well-connected buyer’s agent who can help you navigate the shifting sands of the property playing field to sniff out potential deals that meet your needs and wants, both now and into the future.

Please get in touch with our friendly team of buyers' agents as we would love to have a conversation about your next move. Send us your wishlist or call us on 1300 655 615.

and tell us what you are looking for.