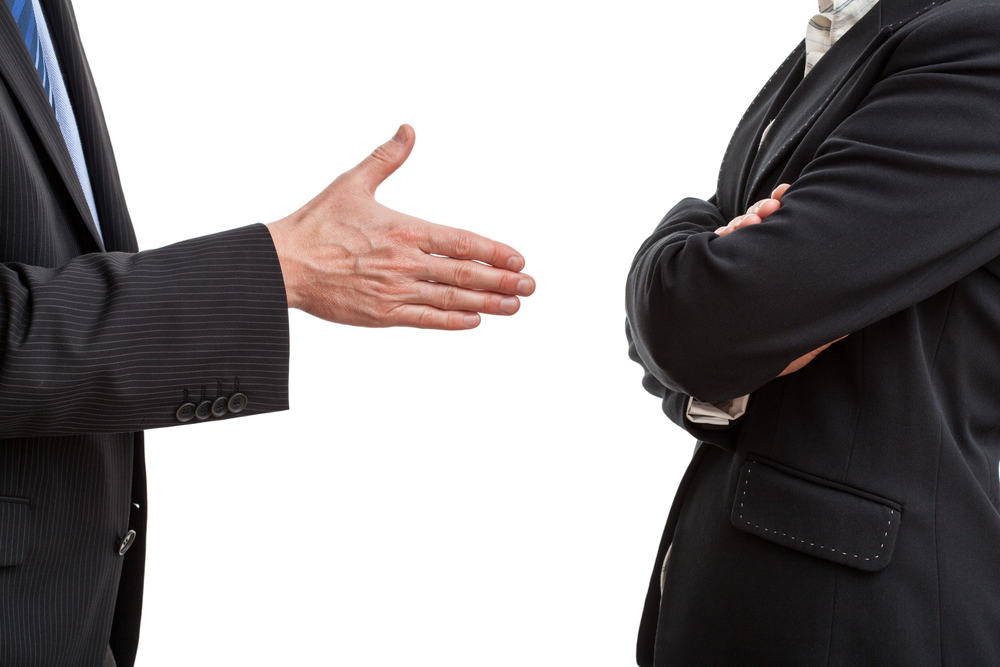 If a picture paints a thousand words, then someone’s demeanour during a property negotiation could paint about a million.

You see it a lot with first homebuyers. They step inside a place they love and want to make their own, and it might as well be written all over their faces. They bound through each room, grinning from ear to ear. They’re visibly excited. They’re noticeably nervous when they sense competition. They show fear when those competitors start to act.

They let the agent know their budget and what they’re willing to pay, without hardly saying a word.

But it’s not just first-timers who give a lot away with their body language. Even the most seasoned property investor can betray the cards held close to their chest with some simple but common mistakes.

Here’s what I’ve learned about how to avoid giving too much away when you’re trying to keep your mouth shut.

A powerful visual cue in any social setting relates to eye contact. Think of the times you’ve been in a conversation with someone who refuses to meet your gaze. It’s uncomfortable, right?

A skilled negotiator knows that this is a sign the other person at the table is nervous or insecure. They don’t maintain eye contact. Their eyes are darting around the room. When they’re challenged in even a small way, they drop their eyes to the floor.

If you’re a buyer who seems nervous, it’s a tell that perhaps you’re not being truthful when you make your ‘final offer’ and that maybe there is a bit more wriggle room than you’re letting on.

Or, it could tell the sales agent that you’re overly emotionally invested in a deal, despite trying to play it cool, and can be pushed further.

Maintain friendly eye contact – don’t stare, that’s just unsettling – when it feels natural to do so.

Another tell-tale sign of nervousness is fidgeting. You’re restless, shoving your hands in your pockets, tapping your feet, drumming your fingers on the table or shuffling from one leg to another.

Keep your limbs calm and open. Don’t cross your arms to avoid fidgeting because that’s a whole other cue. Take deep breaths and focus on relaxing your muscles. Slow your movements. Plant your feet and keep them there.

Also, keep your hands down and still. Avoid rubbing your face, which is seen as a sign of anxiety, or scratching your nose or ear, which can be interpreted as a hint of untruthfulness.

But not too cool…

There’s a fine line between not showing excitement and forcing false disinterest.

If you traipse through a place trying to pretend like you’re not that keen, pulling out a dramatic yawn or two, rolling your eyes while the agent is explaining various features, you’re less likely to win an acting award and more likely to give the exact opposite impression.

Overcompensating is pretty clear to see. Think of all the times you’ve been at a dinner party and encountered someone big noting themselves, trying to appear more impressive than they are.

It’s kind of the same with trying too hard to play it cool. Be measured and hold yourself with a sense of confidence. Watch your emotions and impulses, for sure, but don’t try to mask them with an unnatural alternative.

And just because you’re the one with the cash, doesn’t mean you automatically earn the right to throw your weight around. In a seller’s market especially, being rude or aggressive is an easy way to fall out of favour with the agent and miss out on some valuable information… or even the entire deal! It’s also just not very nice.

Don’t say too much

It’s a given that you should avoid putting all of your cards on the table too early on in a negotiation process.

You wouldn’t walk into a property and tell the agent exactly what you’ve got to spend, what you think the place is really worth and how keen you are to make it yours. But you don’t need to actually verbalise these things to give a little away.

Talking too much – about anything – is another sign that you’re nervous or anxious. Bite your tongue and let the agent do the talking instead.

Give them plenty of space to talk and to fill your silences. They might open up a little more about the state of the situation – if you’re lucky, a sense of how motivated the seller is, what kind of interest there has been or a more reflective idea of price.

You should be confident in how you speak. I don’t mean booming at the top of your lungs like a Wall Street trader. But be assertive. Back yourself. Give yourself a little pep talk in the rear-view mirror of the car before you walk in, if you have to.

Or, get an expert to do it for you

The value of enlisting an experienced, well-connected and qualified buyers' agent is that they’ve been in tough negotiations thousands of times. They’re also not driven by emotion.

They act on your behalf to find you the best property and to get it for you at the best price. And they’ve honed the body language tricks over many years.

Why not let the expert handle all of the hard work as well as the tedious and uncertain negotiation process? It can reduce your anxiety and potentially save you tens of thousands in the process.