Is There a Link Between Property Prices and Population Growth? - March 2021

Property market analyst, John Lindeman explains why population growth does not automatically always lead to a rise in prices, while areas with no increase in population can still experience high price growth.

It’s obvious that when more people move into an area, the demand for housing will rise. This is simply because we all need a place to live. So, more people equals more housing demand.

But, the new arrivals might not be potential property buyers. They could be potential renters who don’t put pressure on prices. 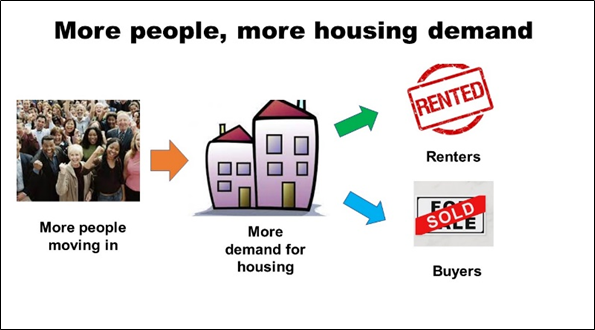 Most population growth and movement comes from renters, not buyers

Although renters only comprise about thirty per cent of our population, they have a bigger impact than their numbers suggest, because they move far for often than owner occupiers. They also have the freedom to live where they prefer, rather than where they can afford to buy, because they are not limited in their choices by house prices. In some areas, new renters make up almost all the demand for housing. 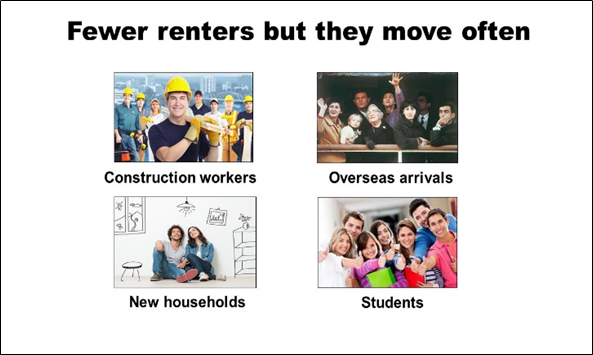 Workers on construction projects building new highways, airports, railways lines, ports and mines tend to rent in conveniently located towns or cities, and when the work is completed, they move on.

The increase in population they cause can be significant, especially in regional areas, but they only lift rental demand, and only while the work continues.

Before international border closures, most of our population growth came from overseas arrivals, and many of these households needed to rent for some years before they were well enough established to buy a home of their own.

When our borders re-open ,we can expect a huge number of new arrivals from pandemic ridden and economically depressed countries, and so rental demand will rise in the suburbs where they first settle, but not prices. But, even without international arrivals, our population is still growing.

Rent demand is still rising in our major cites

We currently have around 150,000 young people leaving home each year to set up their own households and virtually all of them are renters. They won’t choose to rent in outer first home buyer suburbs, or well established family home locations, but in inner urban localities close to entertainment, recreation and educational facilities, and they’ll choose well located, low maintenance units and apartments to rent.

They can make up to eighty per cent of the households in inner suburban precents as well as those precincts with educational institutions and they have a significant effect on rental demand, but not on housing prices.

So you can see that population growth alone does not mean that prices will rise. It all depends on the type of households moving into an area. On the other hand, there are many areas currently experiencing high price growth where there has not been any population growth, so there must be another demand dynamic at work.

Last year, we had to endure lock downs, social distancing and border closures while many people worked from home. We stopped spending on travel, clothing, recreation, entertainment and holidays and saved the money instead.

As a result, many aspiring home buyers have managed to save enough for a deposit and so the number of potential first home buyers has increased dramatically, with a fifty percent rise in first home buyers entering the market over the last year. This has occurred without such people moving from one State to another, but simply moving from being renters to owner occupiers in the same region, city or locality.

But it’s not only the number of first home buyers that has increased - the amount that banks are willing to lend has also gone up. This is because the banks have significantly lowered the floor rates against which they test home loan serviceability.
During the pandemic, lenders lifted their floor rates to seven percent and more, because they were worried that a severe economic recession was heading our way.

Now, however they have dramatically cut their floor rates because the economy is back in growth and the RBA has given an assurance that interest rates won’t rise for some years. The result is that potential home buyers have received a massive uplift in their assessed loan serviceability and higher loan amounts are being approved.

For those who like stats, this table shows the greater home buying capacity that the lower floor assessment rates have given potential buyers, when this is based on their household income. On average, the reduction has given home buyers the capacity to lift sale prices by up to twenty-five percent or more above pre-pandemic levels.

Now you can see why there are more potential home buyers in the market almost everywhere and that they are pushing up prices as they compete with each other, without any significant population growth or movement taking place.

Is it then a myth to say that population growth leads to rising property prices ?

Eventually most new households and overseas arrivals will become home buyers, so they have two effects on the housing market. Firstly, they cause an immediate rise in rental demand in the suburbs where they initially settle and secondly they generate a rise in buyer demand when they eventually become first home buyers. The transition period may be around four years or more, but it is an eventual certainty, so we know that population growth does lead to increased buyer demand over time.

Does this mean that population growth will always cause an immediate rise in rents and a delayed rise in prices?

Whether prices or rents rise as a result of population growth also depends on how the amount of available housing stock compares to the demand.

For example, if there are more rental vacancies than new renters in a suburb, rents won’t rise along with the demand for rental accommodation until and unless a shortage of rental properties emerges.

Similarly, as long as there are more properties for sale on the market than there are potential buyers in any area, prices won’t go up. This is simply the law of supply and demand at work, but what is also crucial is that the type of properties for rent or for sale must be of the sort that are in demand.

Students living near a university or teaching hospital will seek affordable bedsitter or studio units to rent, not expensive apartments with balconies and a view.

Downsizing retirees will look to buy low maintenance, easy access and high security dwellings in locations within an easy walk to local shops. They won’t buy a three level open plan house on the side of a hill located six kilometre from town.

To be successful, investors must perform a balancing act by securing the right properties in areas with a rental stock shortage right now and a potential buyer stock shortage when it’s time to sell.