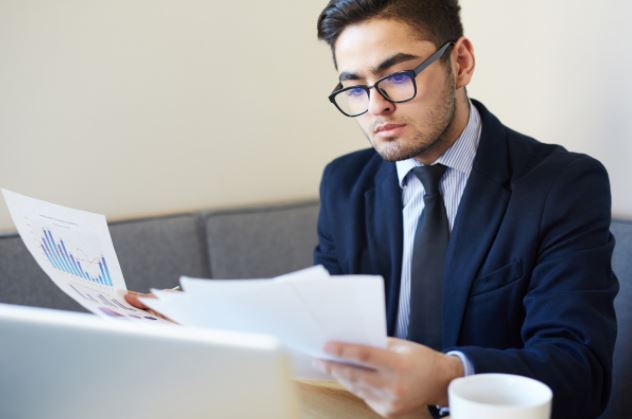 Economists are always making predictions about our economy, interest rates, whether unemployment will rise or fall and of course, our property markets.

John Lindeman reveals why they so often get property forecasts wrong.

This recent headline really got my attention, because a fifty percent fall in house prices would indeed be catastrophic.

Of course, that is the purpose of such dire “click bait” forecasts. They stop us in our tracks so that we will take notice. The property media has been full of ominous predictions since the pandemic broke out, but there are two fundamental issues with such forecasts - the first is that they are so often wrong, and the second is that even if they turn out to be correct, such sweeping generalisations are meaningless.

Economists often get it wrong

Economists and other theorists love making property market forecasts, especially those doom and gloom headline generating ones, and their woeful track record doesn’t seem to deter them at all.

Some of you may remember these famous quotes made by economists at the onset of the Global Financial Crisis, when It seemed likely that our property markets would follow those of the UK and USA and crash:

“The price of Australian homes could fall by up to 40% over the next few years” - Dr Steve Keen, University of Western Sydney (September 2008).

A few years later, when it became obvious that we had avoided such a disaster, there was another round of such doom and gloom predictions:

“I have noticed the run-up in Australian house prices and it sure looks like a bubble to me”  - Dean Baker, Centre for Economic and Policy Research (October 2010).

“Australian house prices could be overvalued by up to 35 per cent.” - Goldman Sachs Housing Report, Goldman Sachs (September 2010).

“Ill-advised policy, such as the government's first home-buyers grant, has combined to make Australian houses 40 per cent above fair value. The real return on residential property over the next decade is likely to be negative.” - Gerard Minack, Chief Equity Strategist, Morgan Stanley (October 2010).

The reason that economists often get it wrong

What prompted those well-known identities to put their reputations on the line with such confidence? The answer lies in how our property markets were performing at the time these forecasts were made. The graph shows you the official ABS capital city house price index data from 2003. 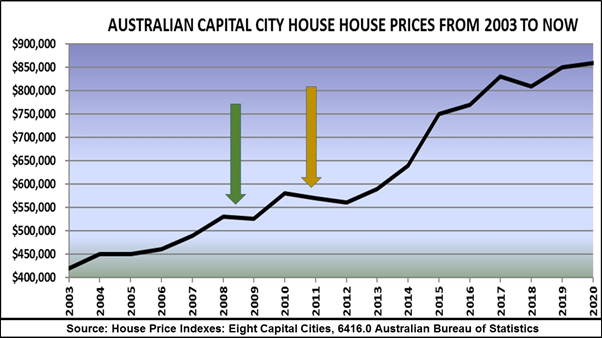 The graph shows you how our averaged capital city houses prices have moved each year since 2003. The green arrow shows you when the first series of “doom and gloom” predictions I have quoted above were made in 2008, and the orange arrow indicates when the second lot were published in 2010.

You can see from the graph that these economists made their predictions when house prices were actually falling. They were simply “trending” the fall in prices forward, which is an accepted predictive technique in the world of economists, but simply doesn’t work at all in the property market.

This is because most of our dwellings are not owned by investors, but by the people who live in them, so they are not subject to the same laws of supply and demand as other assets such as shares, savings or commodities are. Put simply, most people do not buy property as an investment, but as a home.

Because of our continued population growth and the availability of finance, housing demand rose after those short lived downturns in 2008 and 2010. House prices rose strongly again, leaving the merchants of doom with egg on their faces.

Even if they are occasionally correct, such predictions are useless. They take a top down “macro view” which is fine when we are looking at the share market, interest rates or the price of gold, but impractical with property.

Why? because there over ten million properties in fifteen thousand suburbs and every dwelling is different. Some suburbs may boom as others decline, rent returns may be strong in one locality and weak in others.

Whether you are an investor or an owner occupier, you will buy one property in a suburb, not an entire city. Lumping them all together may make for exciting, interesting, or even scary headlines, but they are seldom of any real value to investors, and that’s not just because they often turn out to be wrong!