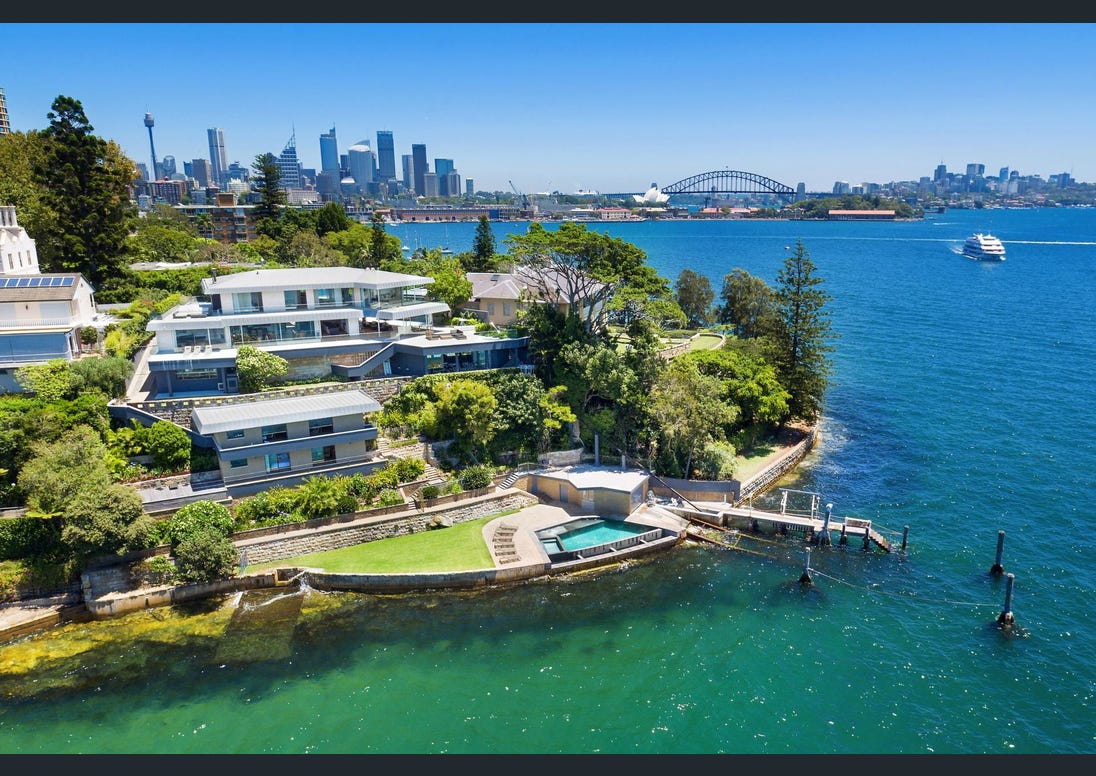 Sydney has long had a reputation for having some of the priciest neighbourhoods in the country, with a whole host of enclaves commanding top dollar for some impressive pile of bricks.

In fact, nine of Australia’s ten most expensive suburbs are all in the Harbour City, despite Melbourne rapidly gaining on its northern counterpart in terms of population.

Values have soared even higher over the past several months, with Sydney now in the grips of another property boom – and the top end of the market leading the charge.

These are the seven most expensive suburbs in Sydney right now and a rundown on what makes them tick.

This could just be one of the most visually stunning locations in the world. I know that’s a big call but pay a visit and tell me I’m wrong.

Darling Point is just four kilometres from the city, occupying a prime harbourside spot to the east, and commanding spectacular and jaw-dropping vistas of the water, Harbour Bridge and Sydney skyline.

It’s also home to some truly phenomenal real estate, including grand manors that are well worth their staggering asking prices. The median might be $7 million, but the houses that do hit the market often go for much more than that. They’re also extremely rare and usually sold off-market.

Buyers are more likely to have success snapping up a fabulously located unit with impressive views, but they’re not cheap either. Take this three-bedroom stunner that recently sold for a whopping $5.2 million.

But with everything you need within walking distance and an outlook that can’t be beat, it’s no wonder the who’s who are willing to spend so much to call a slice of this paradise their own.

If you’ve ever got a spare afternoon, spend it slowly cruising through the streets of this beautiful suburb to marvel at the mix of architecture.

You’ve got your historic grand masterpieces, lovingly maintained for generations. There’s Art Deco delights, including in charming boutique blocks of flats. And there’s more contemporary mansions that have graced the covers of design magazines.

This is where the well-heeled and well-off live, smack bang between the beaches to the east and the city to the west, bordered by uber expensive and exclusive enclaves like Point Piper and Rose Bay.

The lifestyle here is relaxed, thanks to its abundance of natural beauty in countless parks and gardens. There are some lovely little cafes and delis, but that’s about it – the hustle and bustle is very much kept at arm’s length in surrounding suburbs, making this a very peaceful pocket.

The demographics tend to skew a little older too, although families are drawn to the area by an array of exceptional schools, including the famed Scots College and Cranbrook.

The market here has something for most buyers, from those looking for a charming apartment that won’t entirely break to the bank – like this cosy two-bedder that sold for $1.1 million recently – through to spectacular houses, such as this five-bedroom stunner that fetched for $6.6 million.

Wherever you are in Australia, I’m willing to bet you’ve heard of Vaucluse, one of the country’s most famous premier suburbs.

Home to the rich, famous and well-connected, this peninsula paradise in the east is also packed with sprawling mansions and manors that command top dollar. Traversing the winding tree-lined streets is like stepping into an architectural magazine.

Take the 1831 estate owned by billionaire hotelier Justin Hemmes, the heritage listed Hermitage. Should he ever decide to sell the family home, it would likely challenge records for the most expensive real estate transaction.

Vaucluse isn’t just exclusive – it’s stunning. There are countless beaches lining the area and it has some simply jaw-dropping views of the Harbour and skyline.

There’s a more affordable apartment market too, making it possible to call this part of Sydney home without dropping several million dollars on a home.

Sydney locals joking refer to this part of town as Double Pay – in that you will typically spend much more here on just about everything than you would elsewhere.

The locals are affluent and they like to show it, dressed in their best while spending big at local designer boutiques or kicking back with an overpriced latte at a posh café or a glass of French champagne at a trendy bar.

Demographics skew a little older here in terms of residents, but marvelous Art Deco blocks of flats have always drawn a well-off younger set. That’s increasingly the case thanks to a slew of boutique developments of town homes and larger apartments, as well as a thriving restaurant and bar scene.

And it’s home to The Golden Sheaf, one of the most popular pubs among Instagram-loving 20- and 30-somethings.

When ancient explorers wrote about coming upon an oasis in the midst of a vast desert, that’s how I imagine first-timers to Sydney viewing Centennial Park.

This beautiful part of town is more garden than it is suburb, home to not one but three sprawling parks – Centennial Park, Moore Park and Queens Park. You wouldn’t know you’re still in a city home to several million people, despite being just four kilometres from the CBD.  It’s peaceful and tranquil.

But there’s plenty to keep Sydney’s active locals busy, from walking and running trails to sport and recreation facilities. Whether you like to dawdle, paddle, tackle, pedal or promenade, there’s something for you.

When the residential part of the area took shape, strict design standards were imposed to ensure new dwellings didn’t clash with the stunning parkscape. And so, the homes you’ll find here are grand Victorian and Federation-era beauties comprised of stone, brick, tile and slate materials.

Everything about Woolwich is exclusive. It’s at the end of a peninsula, making it purely a destination and not somewhere you happen upon by chance. There’s little public transport, except for a ferry. Homes aren’t often sold or rented. And there aren’t many shops or cafes.

But stand in one of the handful of postcard-perfect streets and you’ll get an eyeful of the Harbour or city skyline. That incredible outlook is what makes this secluded little pocket so special.

Despite its exclusivity, this is an exceptionally friendly suburb. It’s made up predominantly of families and older residents, so it has a very safe and tight-knit community vibe about it.

Like I said, there’s not much in the way of retail and hospitality, with the exception of the fantastic and quite posh Woolwich Pier Hotel, which most people would kill to have as their local watering hole. For those who prefer peace and quiet, there are seven parks to laze about in.

This part of Sydney is so small that the turnover of units isn’t high enough to give reliable price data, and when they do go, it’s typically to owner-occupiers, so no rental data.

Houses are also tightly held and, given the tiny footprint of Woolwich, are about as rare as hen’s teeth. If you’re keen to settle here, you’ll need a savvy buyers' agent to help you unearth a gem.

The unabashed exclusivity of real estate in Sydney’s premier suburbs means buying a home is like to getting beyond the velvet rope of the city’s most exclusive night club. The best way to get in is undoubtable to have an inside contact. Someone who’s well connected and across all the latest market moves. If you’re keen to be a part of the scene, make sure you contact an experienced buyers' agent to look after your interests.